A common greeting this past week or two seems to be, “So, are you ready for Christmas/the holidays?”

It’s a perfectly friendly, well-meaning question. Nevertheless, I am not sure how to answer. What does “ready” mean exactly? Emotionally prepared? Gifts bought? Wrapped? Food planned? Centerpeice arranged? Even writing those all out makes me feel a bit overwhelmed…

There’s no way around it; a lot of “work” goes into celebrating holidays. I use quotation marks, because is buying and wrapping gifts really work? Not so much. But yet, it is. Work in the sense that it takes effort and organization. I go back and forth: on the one hand, I think it’s important to keep things low-stress. But at the same time, I want both us and our children to experience special holiday traditions, and those don’t just create themselves.

The past several years since I’ve been married, I haven’t gotten around to making our Christmas holidays as tradition-heavy as I would like. I always have grand plans, but never get to many of them. Somehow though, this year, we managed to make lot of things happen, despite having a new baby. I think time took care of things…the past couple of years Willa hasn’t been old enough to participate much in traditions, but this year she has been so excited about everything.

Here are some pictures of our holiday activities so far. And once I get my wrapping done, I’ll be officially ready for Christmas!

^^spinach balls! a christmas tradition since i was little, and i’m so excited willa enjoyed eating a few this year!^^ 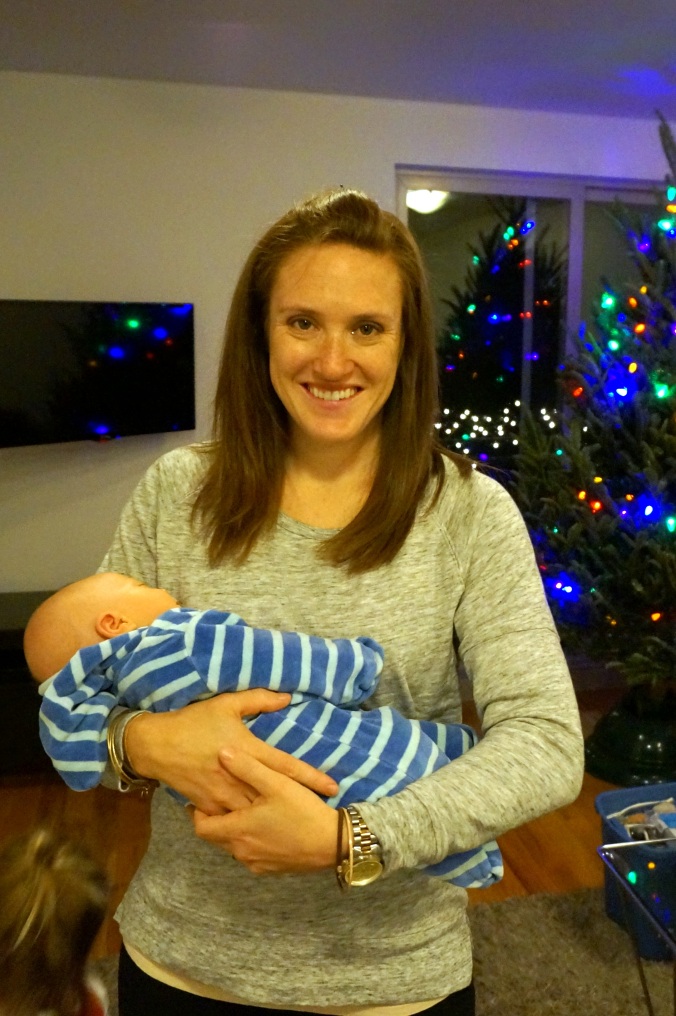 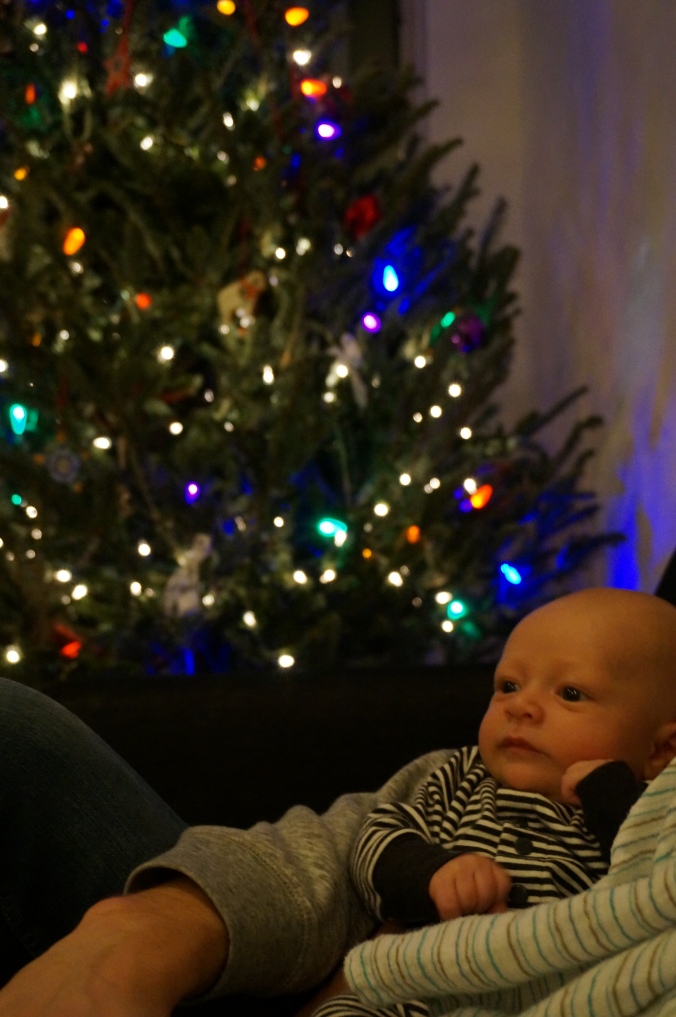 ^^tree decorating! i missed out on most of the ornament hanging this year because i was on the couch breastfeeding, but willa did a great job with a little help from her dad. our tree is from whole foods again this year, and i think it looks good!^^ 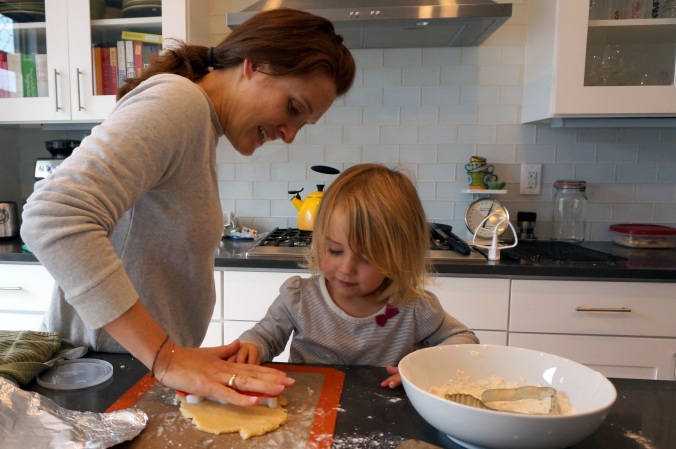 ^^many hours have been spent making three batches of cookies (sugar + gingerbread). the first batch of sugar cookies had natural food coloring for the frosting. tasty, but not pretty (in the photo above, willa’s attempting to make green. puke green, i suppose?). willa’s favorite part is licking anything she can get her hands on. she’s not as interested in eating the finished product, but she is very excited to leave some out for santa!^^

^^last saturday, we rode the bus downtown for a family adventure. we’d thought about checking out the carousel at denver pavilions, but decided to first go to union station for a hot chocolate. union station was so festive that it ended up being our only stop before dinner. we had hot drinks and cake pops from pigtrain coffee, which we enjoyed by the huge christmas tree. santa ended up being there and willa was initially really excited to see him, but as soon as it was her turn she went and hid behind a chair. i don’t really blame her! he scared me a little too (he wanted to sneak up on her in her hiding place so i could get a picture? and when i declined to that plan, he suggested “photo bombing” via a different angle? chill out, santa!) after a quick dinner at illegal pete’s, we took the bus home after dark and admired the christmas lights along the way.^^

Given the recent change in U.S. policy toward Cuba, it seems like a fitting time to talk about Cuban sandwiches! Or, perhaps, it’s a totally inappropriate time? Either way, it’s happening. We went to Buchi Cubano Café recently, and I can’t stop thinking about when I can go back again. Cuban coffee! Pressed sandwiches! Delicious! 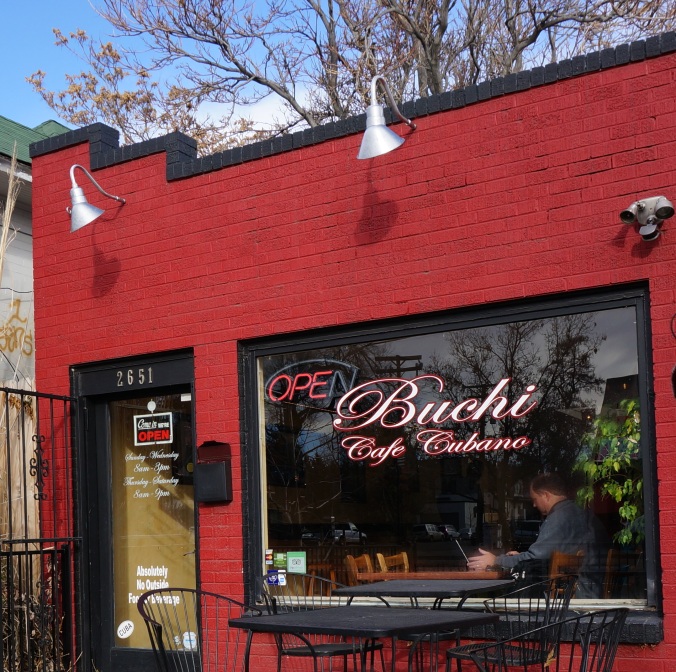 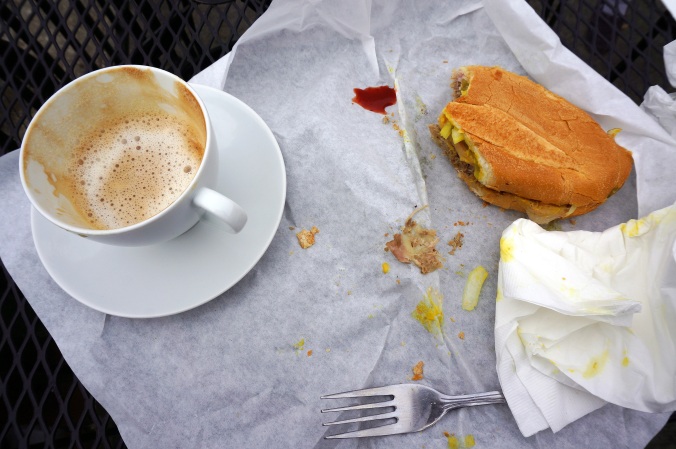 My friend Alli was visiting to meet Cameron, and one night we decided to be super wild and stay up late (10pm) watching the movie Chef. I’d remembered hearing great things about the film, and was really excited to see it. Turns out, the buzz was mostly about the stellar cast and the big-name foodies behind the scenes. It was a fun watch, with especially good music, but really the only takeaway we all had was: we needed a Cuban sandwich STAT. We immediately hatched a plan to walk to Buchi the next morning. 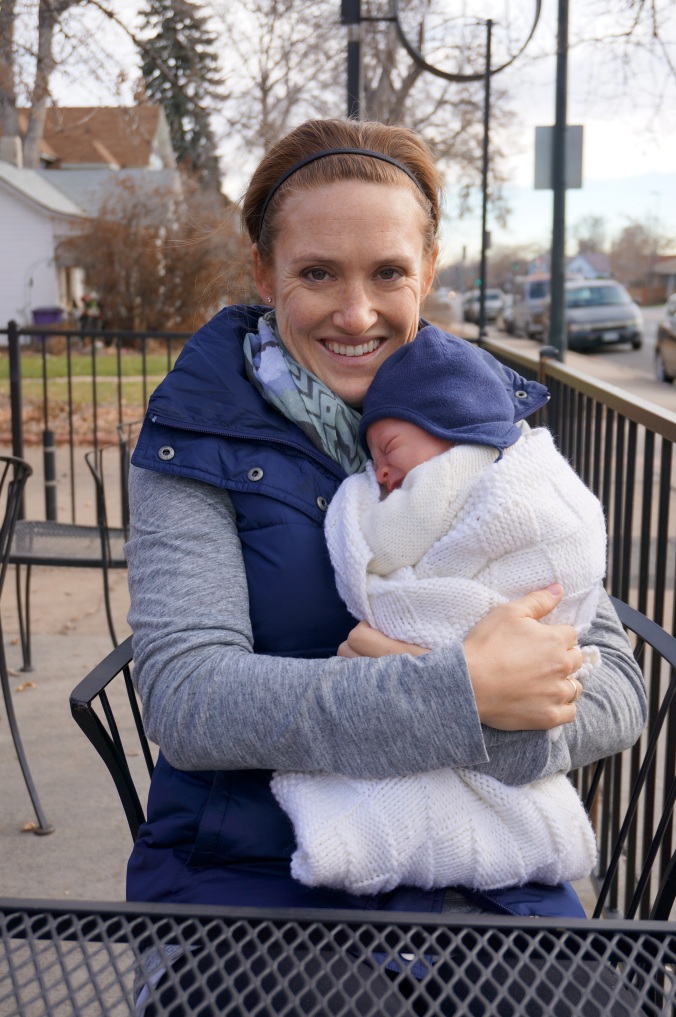 The weather was relatively mild for December, and given that we had our dog and expensive stroller in tow, we decided to sit outside. It took a few minutes to get service because they were so packed, but the server did not forget about us. She apologetically rushed outside with waters and menus, and then promptly returned to take our order. We all, except Willa, decided to get the Cuban Mix: Cuban roast pork, ham, Swiss cheese, pickles, onions and mustard. Willa went for the side of beans and rice, obvi.

They have rich Cuban coffee available with any amount of milk you desire. I had the café con leche this time, but in the past I’ve greatly enjoyed a cortado. Interestingly, they use powdered milk (I found this out when I tried to order a milk for W). I’m not enough of a Cuban coffee expert to know whether or not that’s typical (it probably is, I’d guess?) but it’s delicious.

Walking there and back made me feel justified in having devoured my entire sandwich. Those with more self-control might be satisfied to share one. 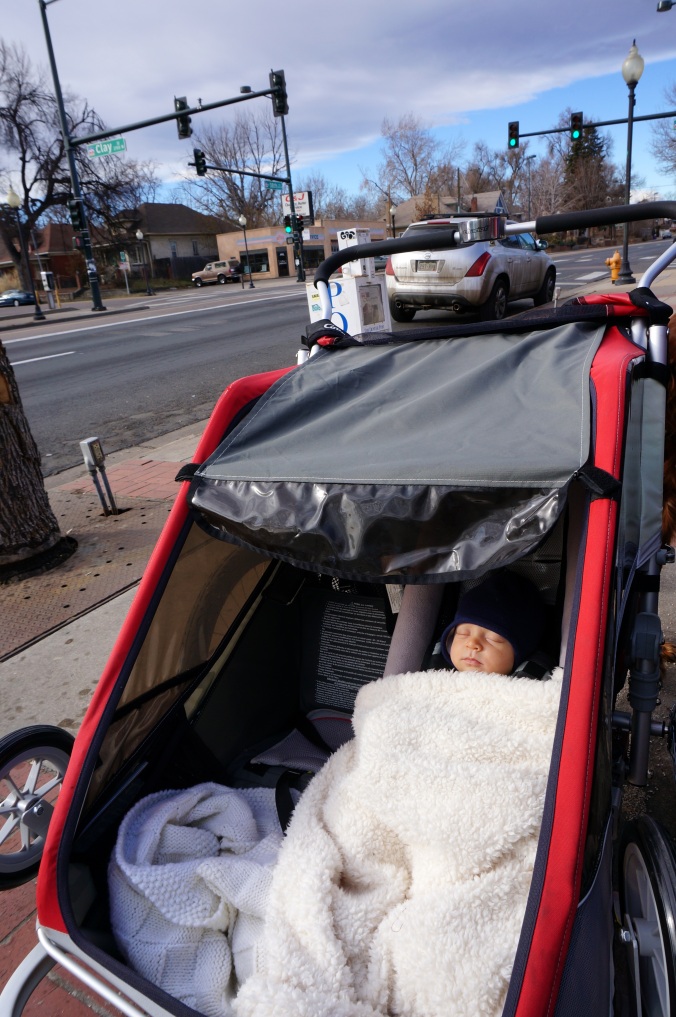 I’ll be back to Buchi soon for sure, but right now I’m going to go make an espresso with eggnog to satisfy my sweet coffee cravings…

Although I claimed to be back on my feet, I’m apparently not quite back on my blogging feet: Christmas is a week away and I’m posting pictures from Thanksgiving. I wasn’t going to, since I’d kind of missed the window, but there are some shots that just make me so happy that I had to share. Most are of Willa; she was was so excited about all things Thanksgiving. She’s definitely at the age that brings a lot of joy to the holidays. It’s really special.

So, yes, we had a wonderful, if not slightly fatiguing, holiday. It was nice to have family in town. Nice to drink champagne. Nice to eat pumpkin pie.

^^i was thrilled to find brussels sprouts on the stalk at whole foods. they were much cheaper than the loose ones and looked so much fresher too. although i had to cut the stalk in half to get it in the fridge!^^ 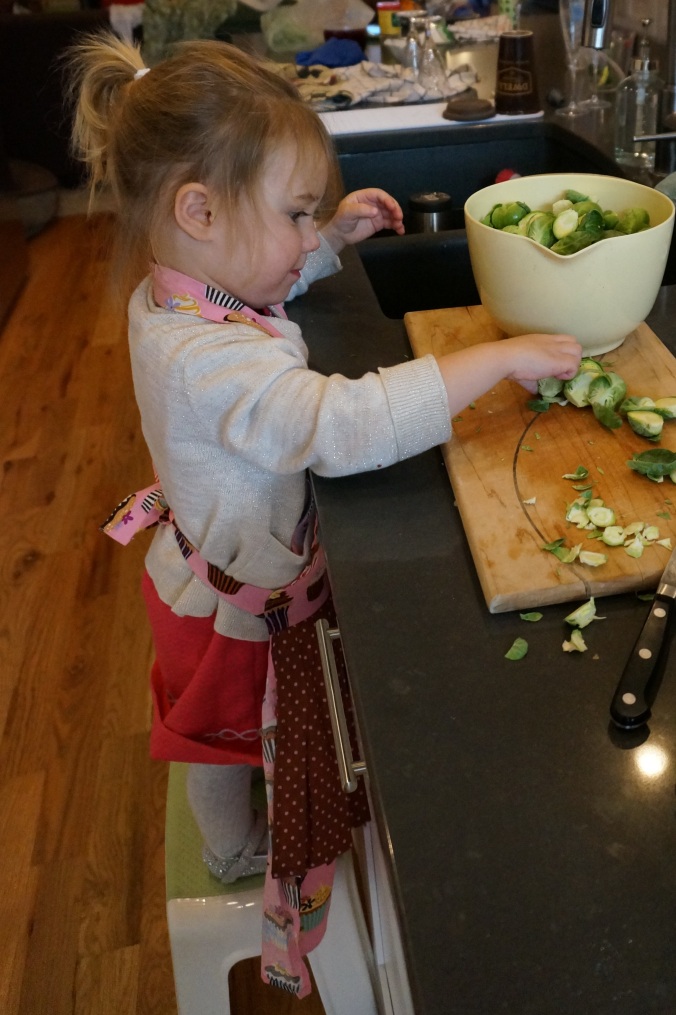 ^^love how much she’s helping lately. and we also love her snazzy new apron from nana!^^ 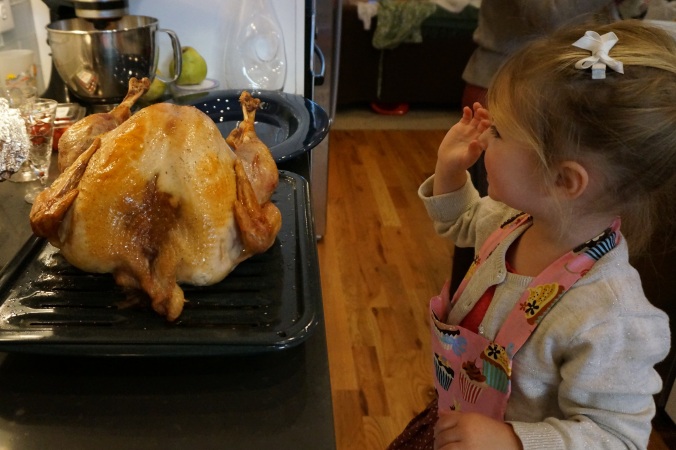 ^^saying, “hi mr. turkey!” she seemed to take it ok when i had to explain to her that the turkey we got in a box was no longer gobbling…ekk.^^ 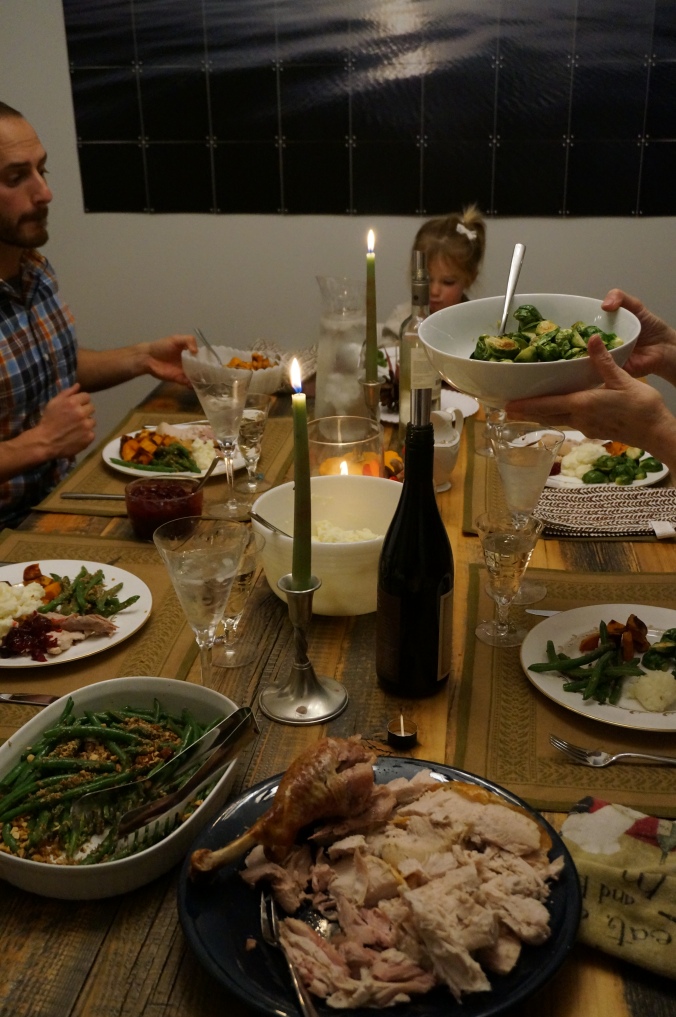 ^^all dresesd up and so very sleepy.^^